“Ethiopia – land of origins.” That’s the first billboard you see when you touch down in Addis Ababa airport. We live with people of an ancient history. Ethiopians pride themselves on their civilisation, which traces back to the Aksumite Kingdom (10th century BC), the Queen of Sheba and their Orthodox Christianity dating back to the 4th century. It really is an ancient land. The country has never been colonised (although the Italians had a go), it was ruled by a line of Emperors from at least the 12th century right up until 1976 and the cultivation of coffee beans began in the 9th century in a place called Kaffa, about 260km from our home. It’s mad to think your flat white in Bear Market originated all the way over here! It really is a remarkable country to live in for a few years.

While it is a place of rich history, it is also a place of extraordinary suffering. Because of the work of Live Aid, many Irish people remember the severe famine in Ethiopia in the 1980s. Poverty and drought are still an ever-present reality for many people in this country of 102 million. You see street kids in rags and young mothers with babies on their backs, breathing in the toxic vehicle fumes, come up to the side of your car when the traffic lights are red. You see farmers with a few sheep trying desperately to sell on market day. You see older women carrying heavy piles of wood from the forest down to the city each day. You see people with missing limbs and disfigured faces sitting in dust on the roadside. At present, across the country, there are over 2.3 million displaced people (more than Syria), many of whose family members have been murdered and houses burnt down by neighbouring ethnic groups. One overwhelming catastrophe after the other and since the dawn of civilisation Abel’s blood screams from the ground.

For me it has triggered so many emotions: sorrow and anger, rage and frustration, numbness, apathy and indifference. And lots of painful questions: What are these people’s stories? Where did they grow up? Where, God, are you in this misery?

And so here we are, trying to follow the Ancient of Days in the ancient of lands. And I’ve never thought so much about hope in my whole life. I have, of course, often thought about personal hope for my own life, my aspirations and my dreams, as I think about myself perhaps 90% of the time! But the more time I spend in Ethiopia, the more planet warms, the more tense geopolitics becomes… the more I find myself concerned with the idea of cosmic hope, hope for this world.  There’s a verse in Ephesians that we mulled over a lot in Impasse a few years ago….

‘He made known to us the mystery of his will according to his good pleasure which he purposed in the Messiah, to be put into effect when the times reach their fulfilment – to bring unity to all things in heaven and on earth under the Messiah.’

I wouldn’t even pretend to comprehend all of the beauty and scope and depth of what the author of Ephesians might be trying to express here! But there’s an idea here that fills my soul with hope: the point, I think, of resurrection and Christian hope and all that is not to escape this world and find heaven but, rather, heaven eventually coming and flooding this earth when Yahweh, according to his good pleasure, brings healing and justice and shalom and renewal to all things in this world when the times reach their fulfilment. Of course, goodness and light and generosity and self-sacrificial love are present, sometimes overwhelmingly, on this earth and we need to give thanks continually and celebrate it. But the times have not yet reached their fulfilment and that is what we hope for. What we have seen only in glimpses we will one day see in full. What we have peered at through smudgy, fogged up glasses we will one day see clearly. 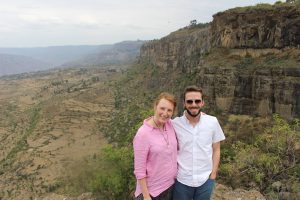 Cosmic hope has both challenged my faith and enriched my faith in this season of our lives.  It does not, and should not, take away our collective and individual responsibility to our families, neighbours, planet and the least of these that Jesus talked about. But rather hope fuels our responsibility because I trust that our labour in Yahweh is not in vain. When I say my prayers I ask God to help me in my unbelief and to trust that this world is not going to burn up in the heat of the sun and that good will ultimately conquer over evil. And then I ask God to help me act accordingly.

Our God is the God of the least of these. He cares about the small details. And I believe he does provide energy and wisdom for any act that builds for his coming kingdom as we, sometimes frailly enough, seek to embody a message of light and love in our communities and relationships. At the close of 2018, we find ourselves in a land of ancient origins full of ancient systemic problems that have always plagued our sacred humanity. But we also find ourselves in the presence of the ancient One, who cherishes us and our neighbours and our planet, who cherishes in fact, all things, and he is not prepared for evil to win nor will he abandon this world.

Part of teaching team at Ignite Network. Leadership coaching and emotional intelligence. Married to Fiona, dad to Norah. Loves walking in forests and on the Camino, coffee conversations, Apple the product and apple the fruit, psychology and John Le Carre spy novels. The thoughts and views expressed in this are his own.

One Response to “Peering at Hope through Smudgy Glasses”